I can talk about anything?

I like Tim Burton. A lot. I like all of the movies he's produced, his short films, animations, cartoons, doodles-I sat through a 2 hour interview of him on Bloomberg once. I've never been more fascinated with what someone was saying in my entire life. He stammered a lot, but I think he just had so much to say. I used to have a speech impediment until i was 13 and if I talk too fast or if I'm just really tired you can still hear it. I have too much to say too. I went to his exhibit at MoMA in New York a couple months ago when i was visiting my sister in Brooklyn.It might have been the coolest thing I have ever been to. They had sculptures he created in his animated films like The Nightmare Before Christmas and Coraline and tons of small sketches and large scale expressions of his imagination. I've been drawn to Tim Burton films since I saw James and the Giant Peach and Edward Scissorhands but it wasn't until the past couple years that I started doing research on him and his productions. He's eccentric and coincidentally was married to Helena Bonham Carter who is one of my favorite actresses and Johnny Depp is his son's godfather-both of them are typically seen in Burton's films.  His expression with basic evenly weighted lines in his sketches are really inspiring and really captivate my attention. I can get lost in the copies of his sketch books my Oma gave me. The special effects, lighting, and all the studio art incorporated  in his movies are remarkable. Though he may have not physically created all of them, most were from his influence. Especially in his films Big Fish and Sweeney Todd. There's a scene in Big Fish where he literally freezes the scene at the circus and has a man walk through the circus ring, pushing the frozen popcorn in the air out of his path. Its ridiculous.
I'm posting some images, links to his website,videos, and some other sweet stuff. its the bees knees 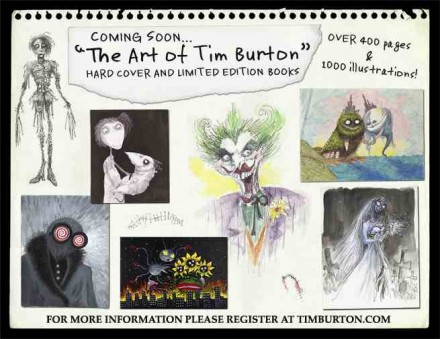 
One of Tim Burton's short films
Posted by averyjn at 1:12 PM

averyjn
I'm majoring at AACC in Graphic Design with a Fine Arts background. Planning on transferring to University of Maryland for their Studio Art Program because I'm really interested in visual effects in movies and digital animation-lighting,modeling, digital sets, backgrounds, the whole 9 yards.